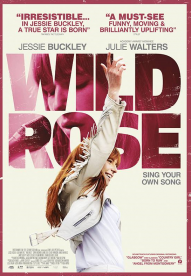 WILD ROSE tells the complicated story of Rose-Lynn, a woman on a quest to become a country music star, while also grappling with the responsibilities of being recently released from prison and a young mother of two children.  She soon gets her chance when she travels to Nashville, Tennessee, on a life-changing journey to discover her true voice.

(Jessie Buckley is also in Judy on 21st February)